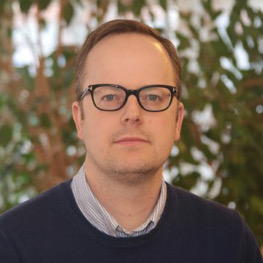 This use-case is taken from the conference paper

where the interested reader can find more complete explanations and a full set of references for explainations to used concepts and methods.

This use-case is presented using the Matlab toolbox, but all commands in the use-case have direct counterparts in the Python toolbox. 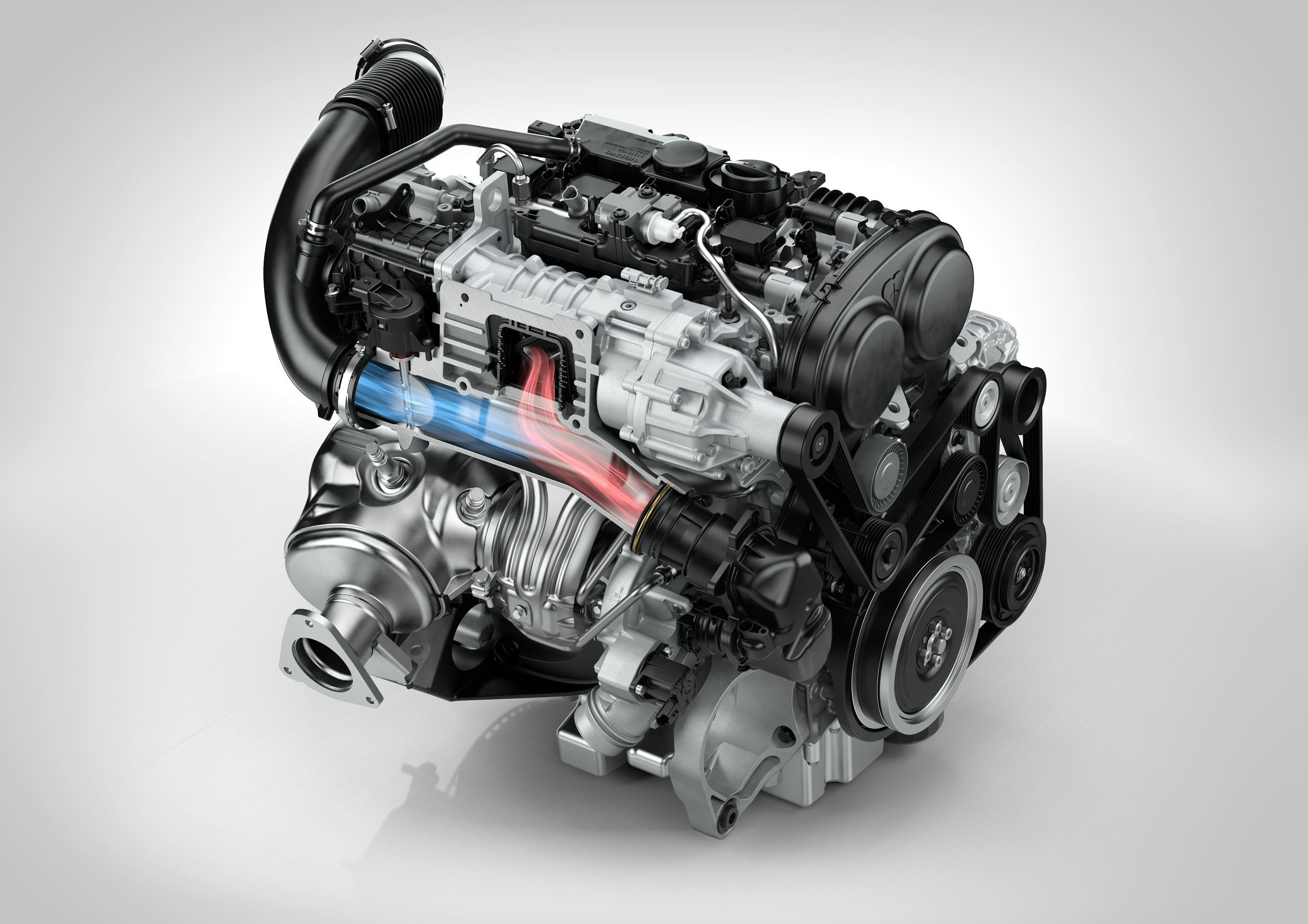 The air-path of an automotive gasoline engine is important for understanding how much fuel to inject, how to keep combustion emissions low, protect exhaust catalysts, and optimize efficiency. This system is not only industrially relevant, it is also an interesting system for academic basic research due to its complexity, its highly interconnected subsystems due to turbocharging, and challenging to model accurately. The model used here is based on a control oriented model of the air-path consisting of pressure dynamics that describe flows and thermodynamic relations to describe temperatures and heat flows. The model has 94 equations and 14 states. The model is highly non-linear, has external, mapped, functions implemented as lookup-tables, and hybrid mode-switching statements (if-statements). 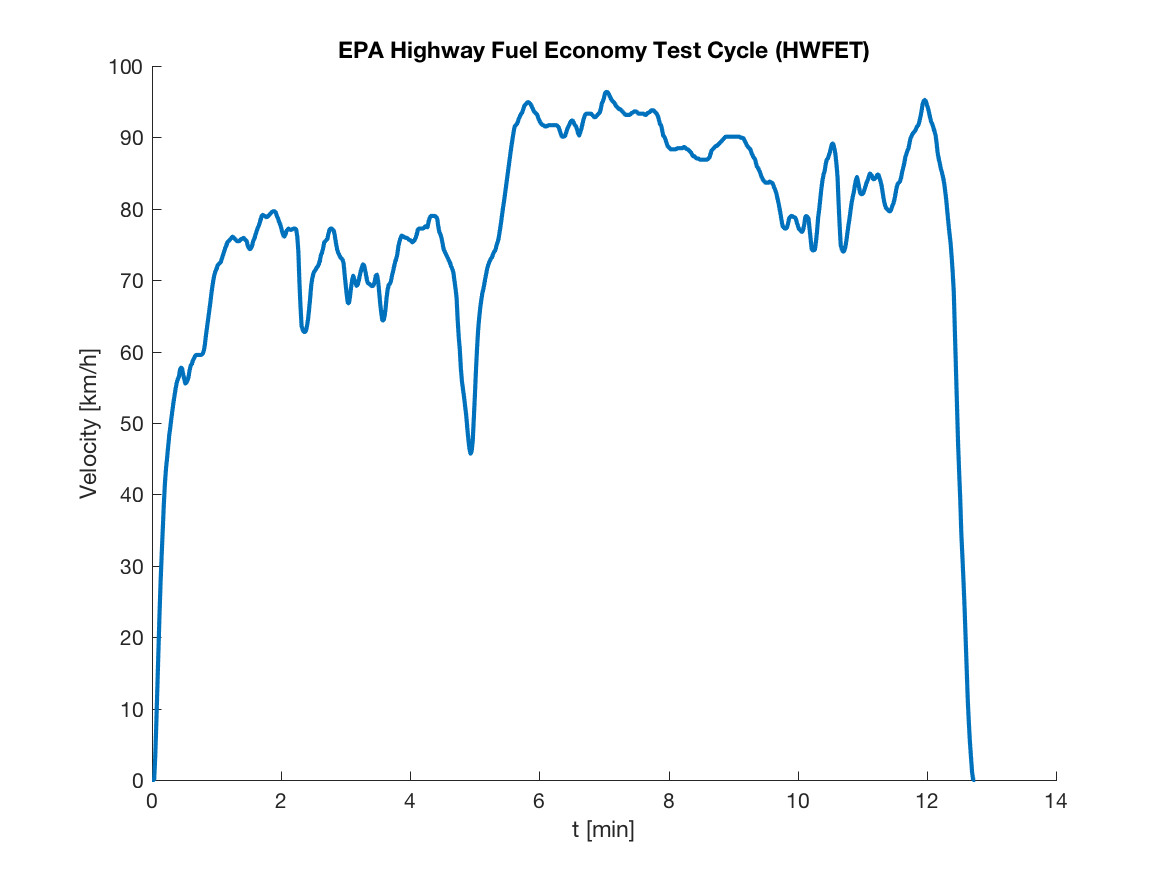 Measurement data is obtained in an engine test cell at Vehicular Systems. The engine, a standard production engine, is equipped with a development control system and subjected to load conditions corresponding to a car driving the EPA Highway Fuel Economy Test Cycle. Engine operation is thus transient, although not violently so, and correct handling of dynamic engine behavior in the diagnosis system is essential. The objective is then to, during normal operation, detect and isolate the faults with a given false alarm probability and optimize detection performance.

The model-object is created by a statement

where the struct modelDef is a model definition containing the fields

In addition, the model relations/equations are written directly as symbolic expressions. For example, a restriction model using an external function W_af_fun, a control volume with a mass state m_im and a temperature state T_im, and a measurement equation for the air mass flow W_af can be written as

The toolbox supports only structural models, but here models with symbolic model equations is used since the objective of the use case is to go from model to generating code for residual generators and then expressions for the model equations are needed. When the modelDef structure has been defined and the model object has been created it is time to explore the model. Basic model information is obtained using the Lint class method 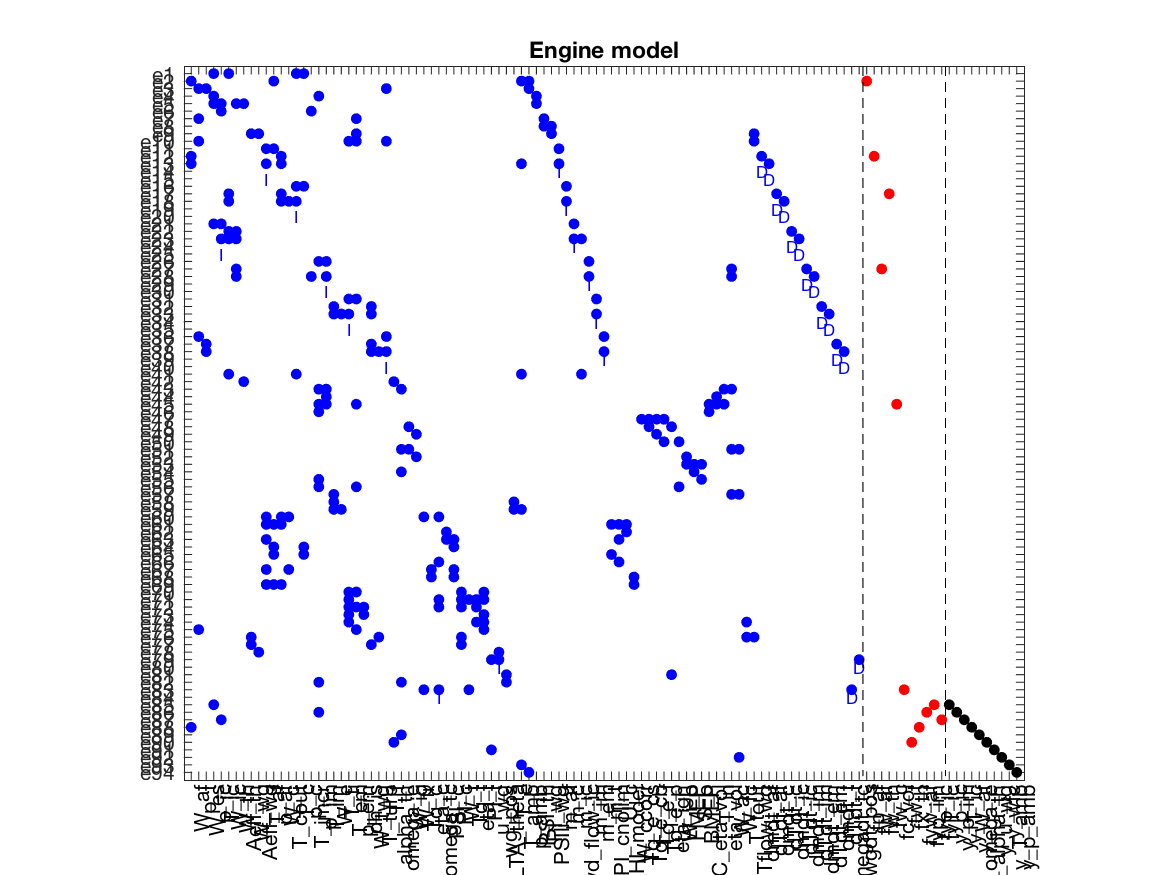 The model structure, i.e., which variables that appear in which constraints, are extensively used by the methods implemented in the toolbox. This model structure is automatically inferred from the model equations and the PlotModel class method can be used to visualize the model structure. It shows the equations on the vertical axis and the variables on the horizontal axis. A dot represent that a variable appears in the corresponding equation. Blue, red, and black dots represent unknown, fault, and known variables respectively.

Now, with a defined model there are many diagnosis analyses that can be performed on the model structure only. For example, it is possible to find out if the model contains enough redundancy to detect and isolate faults, i.e., answer diagnosability questions like

“Can I detect this fault?” or “Can I isolate this fault from that fault?” or “What isolation performance is possible using only direct application of state-observers?”

A key tool in structural analysis for fault diagnosis is the Dulmage-Mendelsohn decomposition. To plot the decomposition, extended with fault variables and equivalence classes as described in (Krysander and Frisk, 2008), is computed using the PlotDM class method

which results in the plot 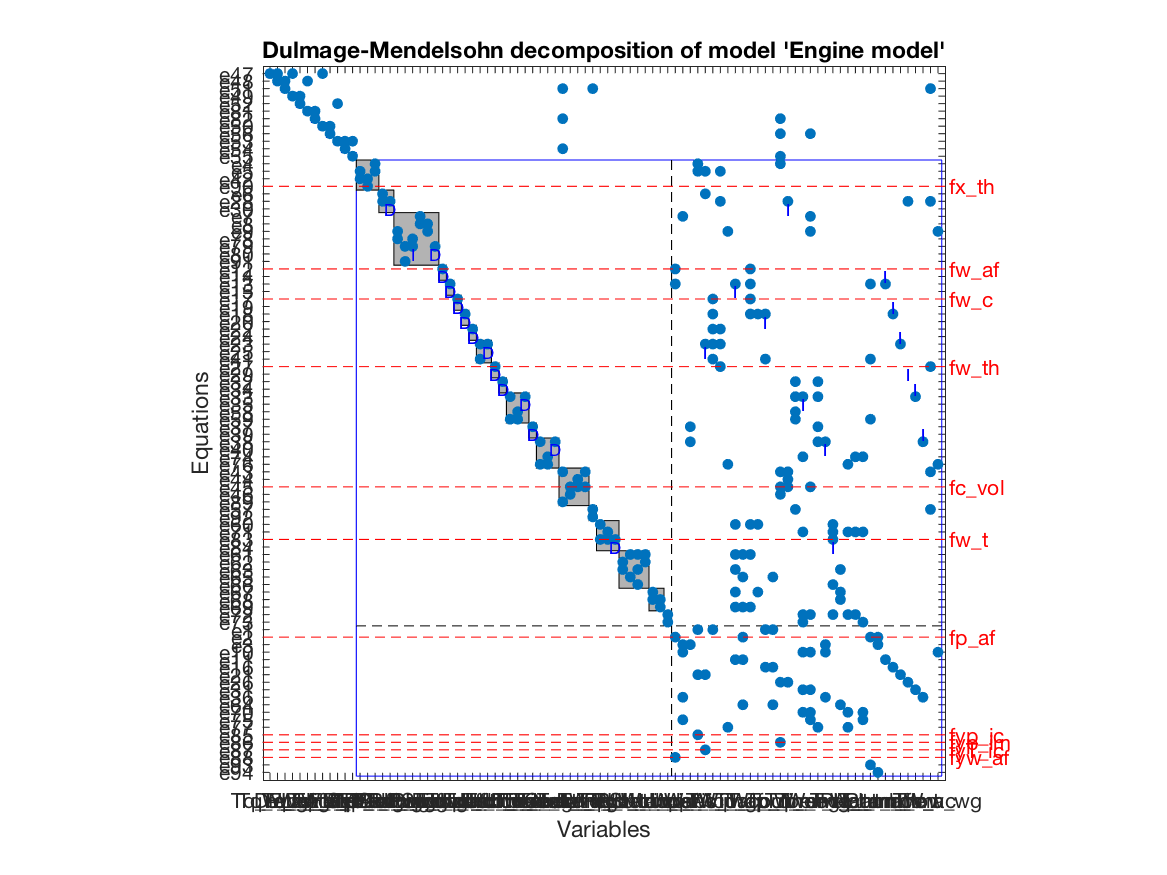 Although the canonical form is informative, it contains a lot of details. Another form of illustrating single fault isolability performance is the isolability matrix computed using the class method IsolabilityAnalysis as 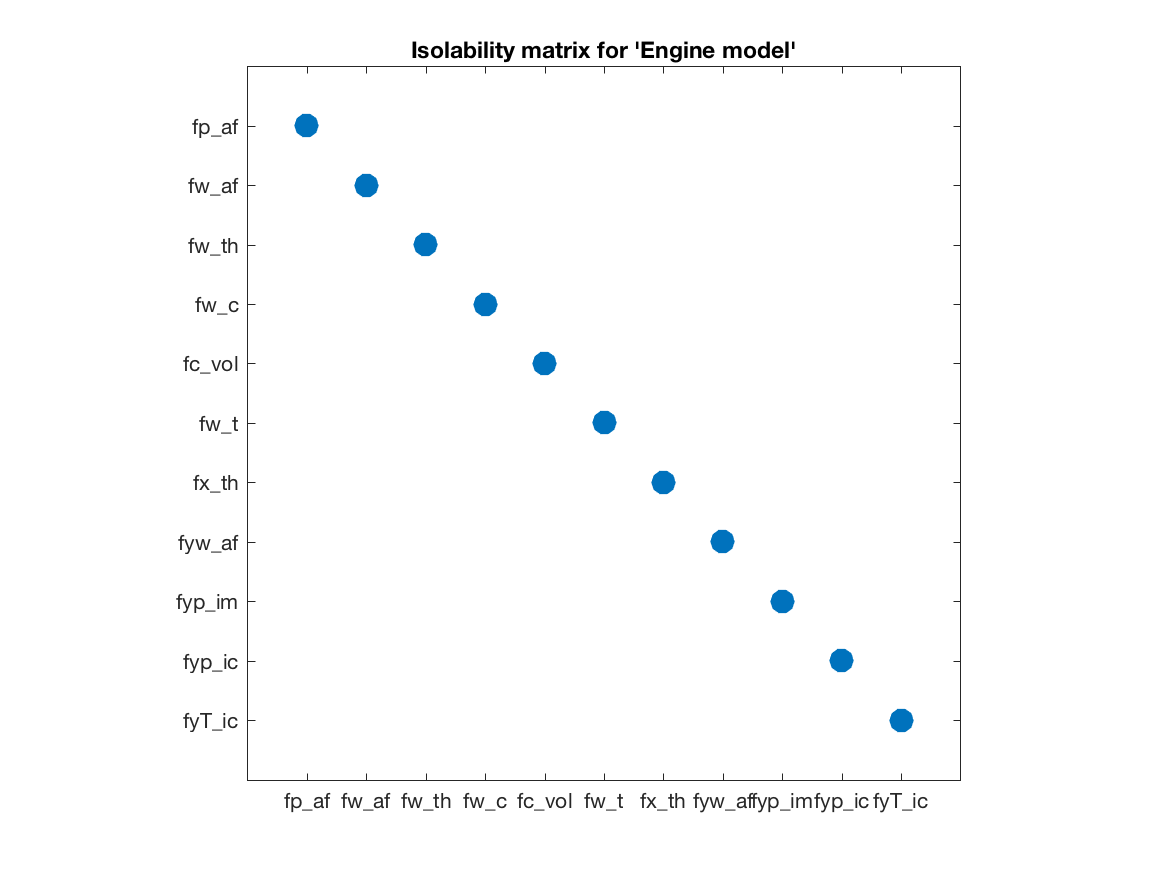 A dot in position (i,j) indicates fault j will be a diagnosis if fault i is the present fault. Thus a diagonal matrix represents full single fault isolability, i.e., all single faults are uniquely structurally isolable in the engine model.

Low structural index is an interesting class of models since, for example, for low-index models established techniques like state-observers and Extended Kalman Filters can be directly applied while this is not true for high-index models. The isolability of faults when only using low-index approaches can be computed by 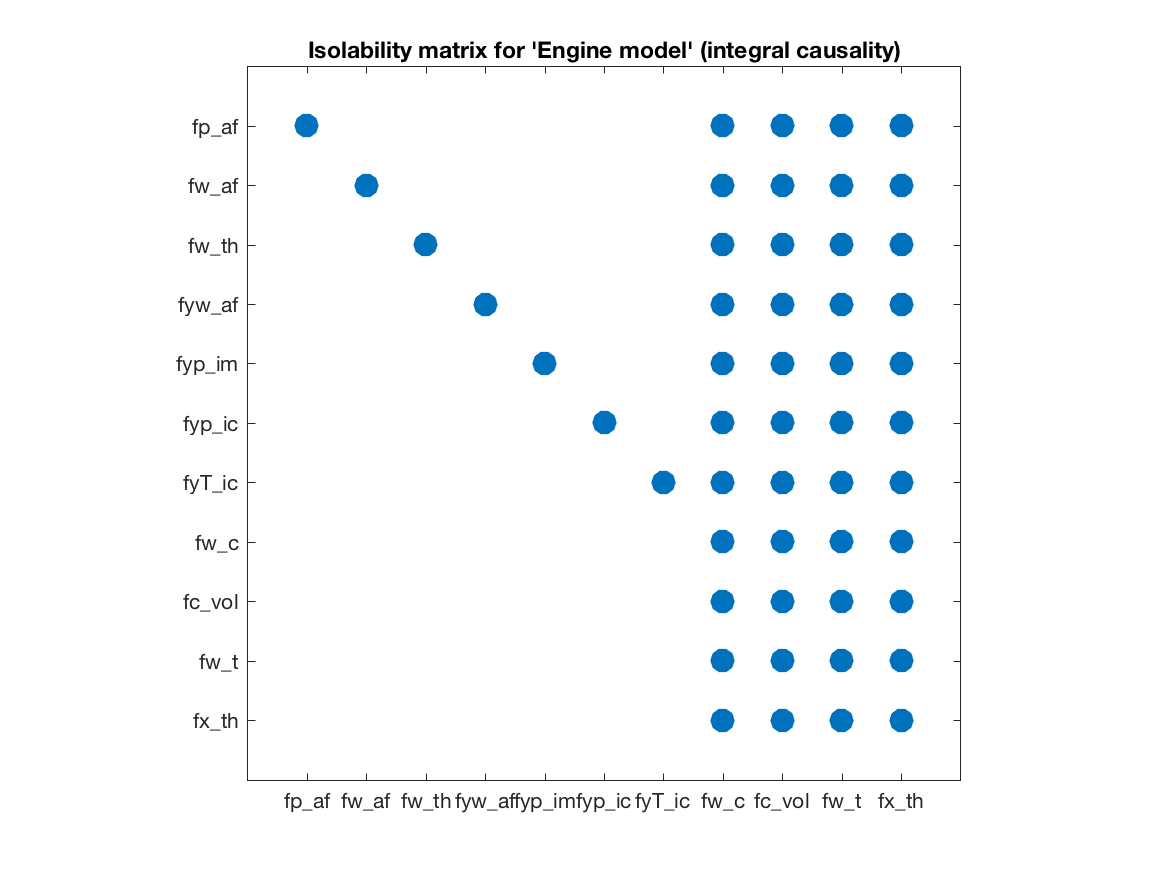 The isolability matrix shows how the fault isolability performance degrades, which is expected, if the residual generation techniques are limited to pure integration based methods. These isolability matrices gives a direct way to early evaluate possible isolation performance of the model and with the given measurements. Of course, these are structural results meaning that even if the isolability matrix indicate that all faults are uniquely isolable, it is not certain that this is realizable in the real application with a required detection and false-alarm probabilities. But is gives an important first indication on what is possible.

One successful approach to residual generation is to find testable sub-models and then, based on such sub-models, design residual generators. The first step is then to make a complete search for testable sub-models, here Minimally Structurally Overdetermined (MSO) set of equations. This step is based only on the structure of the model and in the engine model there are 4496 MSO sets. This means that, even with redundancy degree of only 4, there are several thousand different sub-models that can be tested independently. In the software, to compute the set of MSO sets use the MSO class method as

The output msos is a cell array of index vectors to equations in the model. It is possible to compute the isolability of all MSO sets as

that is equal to the isolability matrix computed earlier.

Low-index and observability properties of sub-models

For the engine model there are 206 low-index MSO sets out of the 4496. Performing the call

If a state-observer technique is to be used, observability of the sub-models is of importance. Structural observability can easily be checked, for all MSO sets, with the class method IsObservable as

In the engine model, all MSO sets are structurally observable.

There are many ways to design a residual generator based on a model with redundancy. Sequential residual generation is one direct and simple way, especially if the model is of low differential index. An MSO set have exactly one more equation than the number of unknown variables and this means that if one equation is used as the residual equation, the remaining equations will form an exactly determined system of equations. Then, the exactly determined set of equations is solved for all unknown variables numerically on-line and insertion of all computed variables in the residual equation then produces a residual. For the engine model there were 4496 different MSO sets and previous analysis gives that there exists 206 low-index sub-models. From these 206 sub-models the toolbox can automatically generate a large number, here 728, of candidate residual generators with integral causality. Using the IsLowIndex class method, it is concluded that MSO number 1650 with its 74:th equation as a residual equation constitute a low-index problem. A matching, i.e., computational path for the exactly determined model is found using the class method Matching and then the method SeqResGen can be used to generate Matlab or C-code.

This generates an object code that can be called directly from Matlab with measurement data and model parameters as inputs and the residual as output. Next step is to evaluate generated code for a set of such residuals on measurement data. 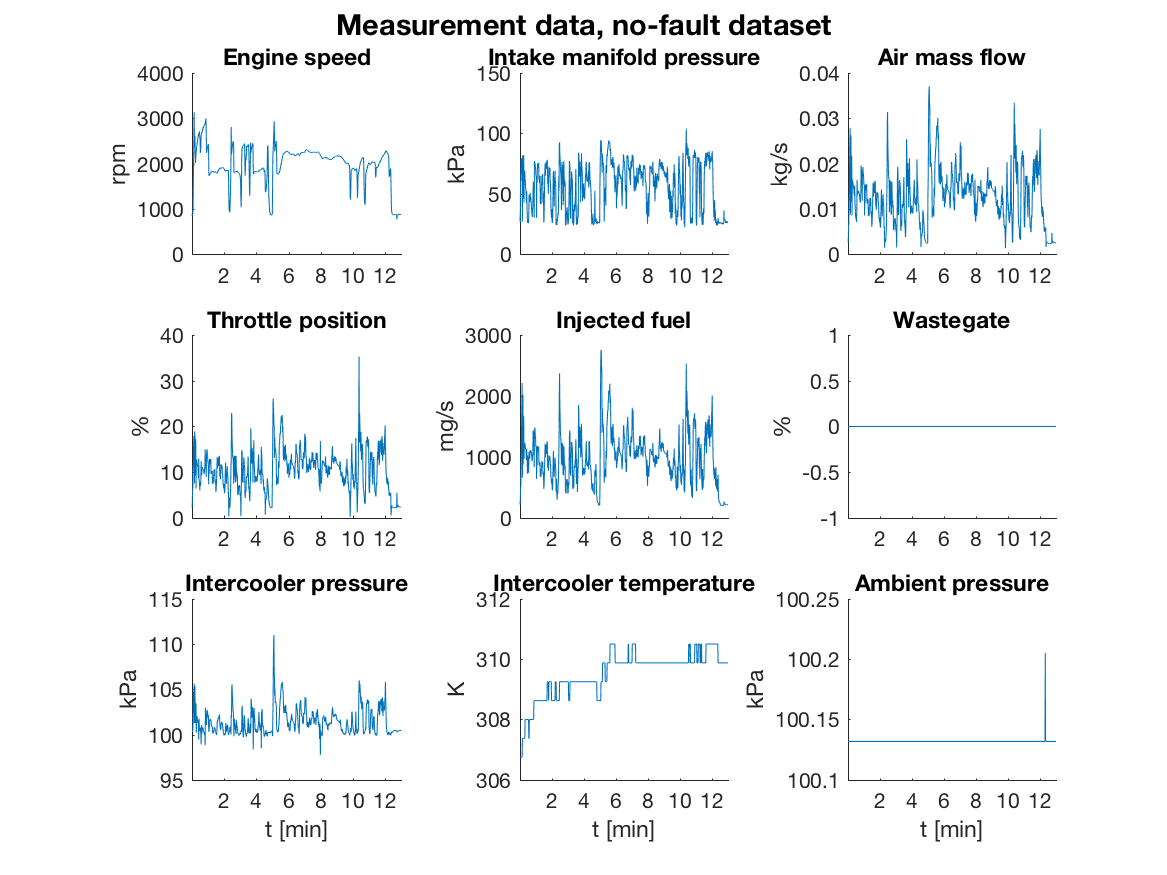 Out of the 728 residuals only a few is needed for isolating between the 4 faults and using a data-driven test selection procedure not described here, 7 residuals were in the end chosen for this illustration. Using class methods FSM and IsolabilityAnalysisArrs, the fault signature matrix and the isolability matrix of the selected 7 residuals are 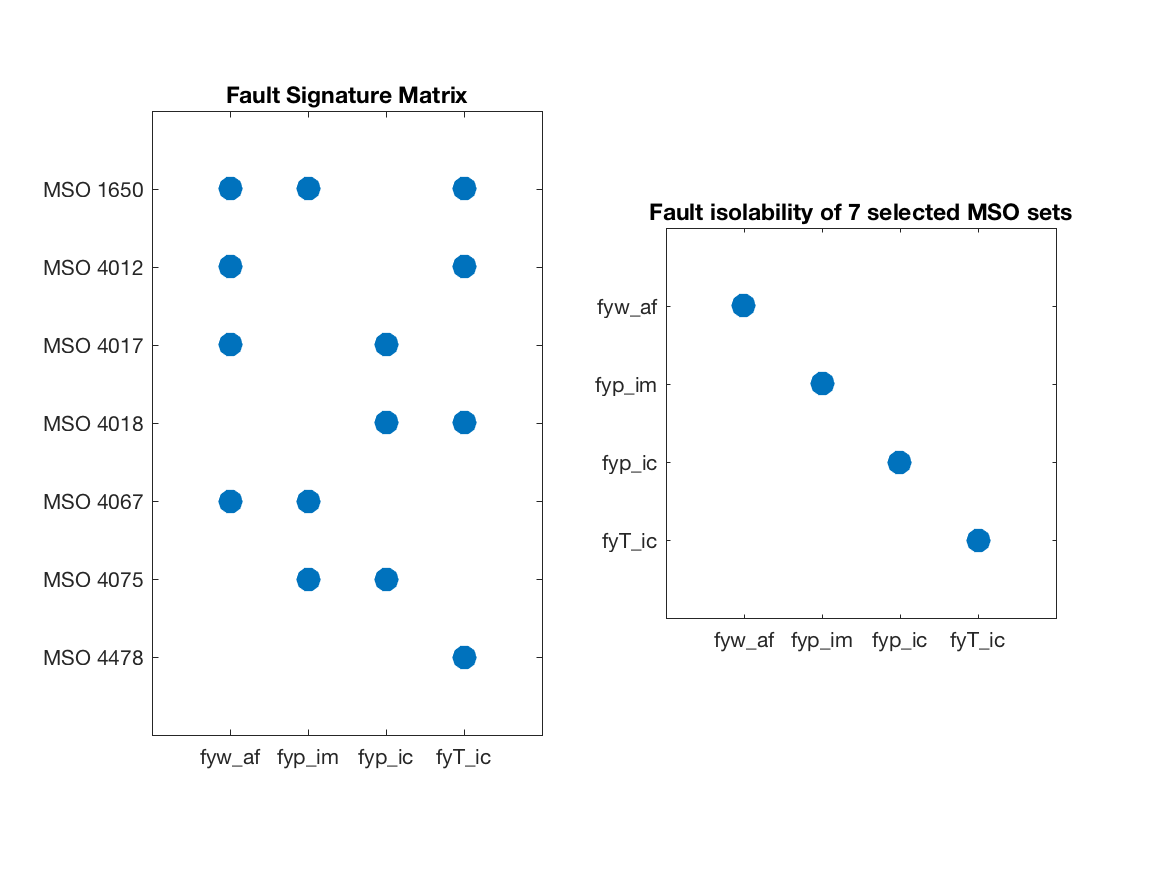 As can be seen, all single faults are structurally isolable.

The generated code for the 7 residuals are run on the 5 data sets and the residuals in the fault free case are shown in the plot below where the dashed lines correspond to thresholds selected to achieve a 1% false alarm probability. 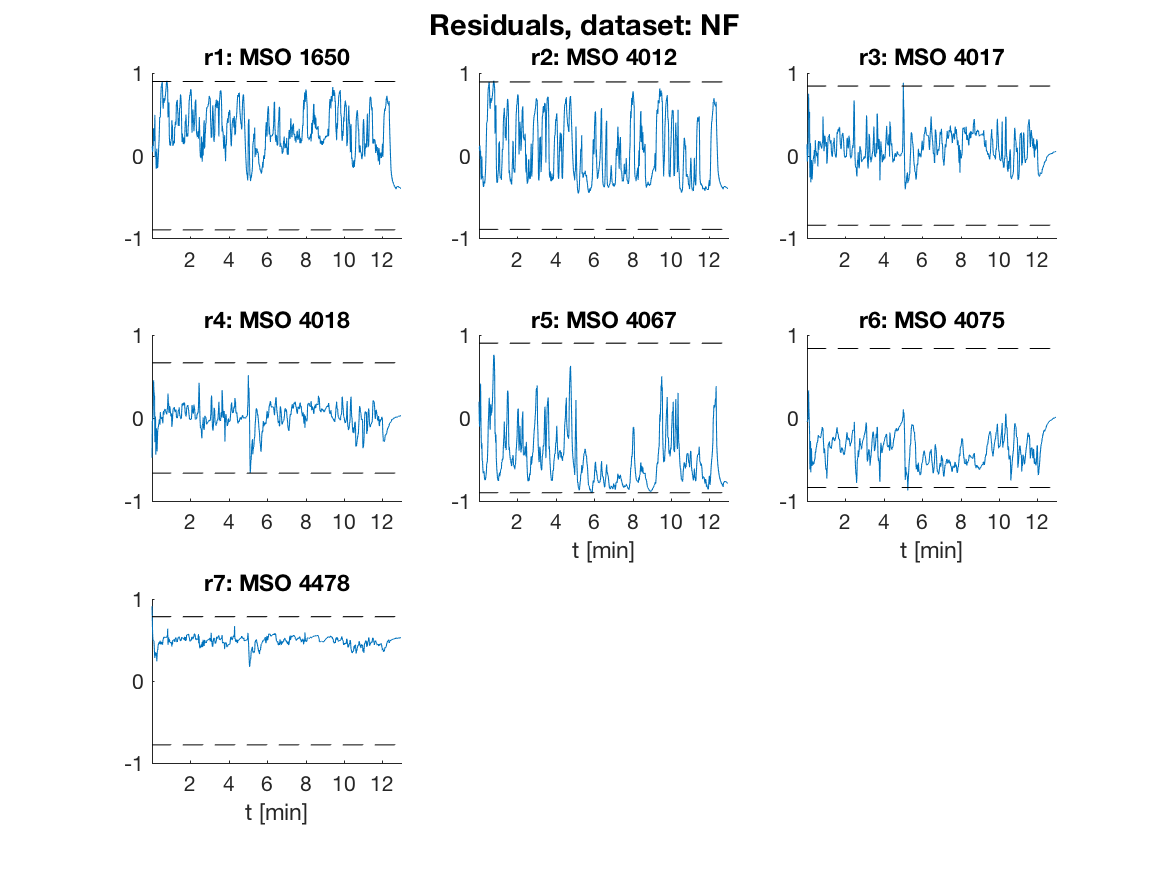 where z is a matrix with the measurements, the struct state_init gives the initial state, params the model parameters, and Ts the sampling time. It takes about 0.55 seconds to evaluate a residual for 12 minutes of 1kHz sampled data on a 2016 Macbook Pro which corresponds to about 1500 times faster than real-time. 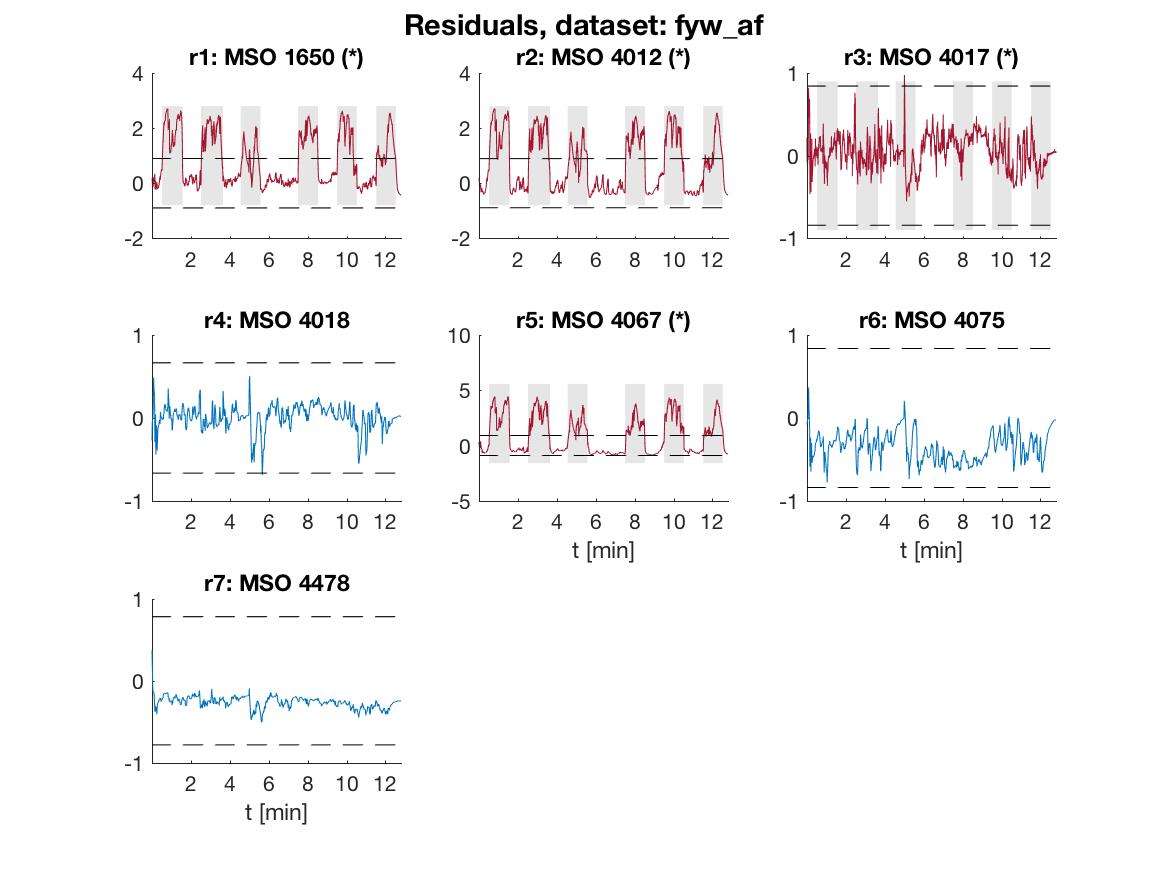 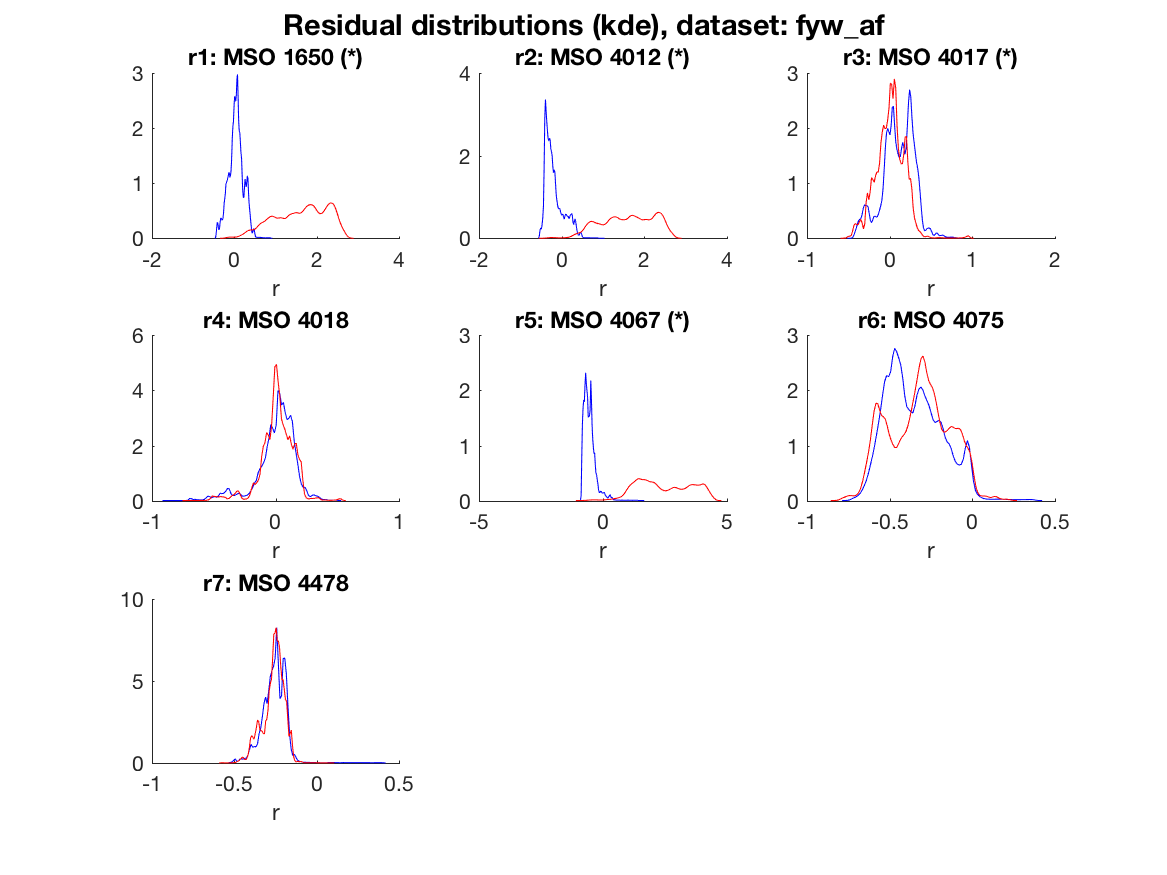 Given the residuals and thresholds, the consistency based diagnosis candidates as a function of time, in the case of an air mass-flow sensor fault, are 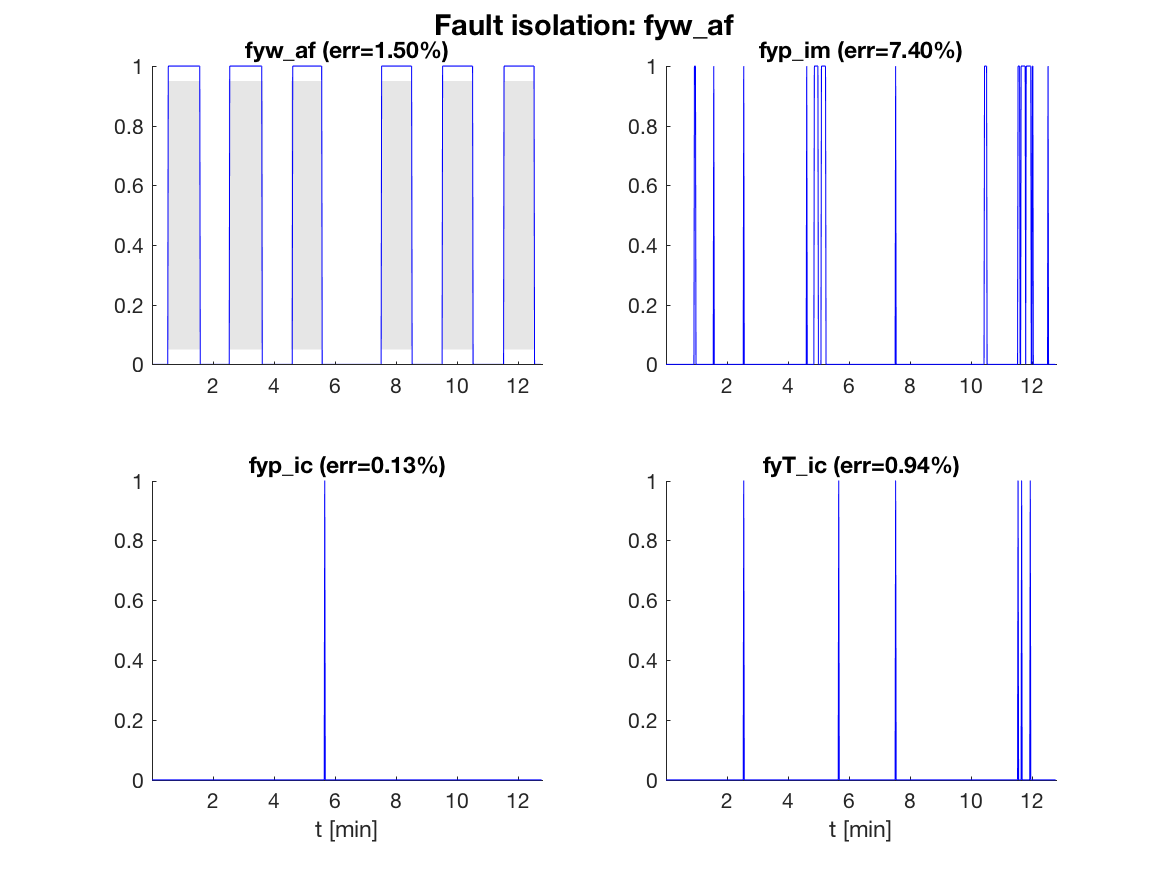 In the figure, a 1 means that the fault is a diagnosis and a 0 that it is not. The percentage of time where there is an isolation error is shown above each plot. Here, no post-processing is performed, and the error can be improved by post-filtering or applying adaptive thresholds, maybe at the cost of a delayed detection. It is clear that the fault isolation reliably indicates the correct fault fyw_af and isolates reliably from fyp_ic and fyT_ic but has a little more difficulty isolating from fault fyp_im.

To summarize the performance of the generated diagnosis system, the confusion matrix is illustrated using a 3D-plot 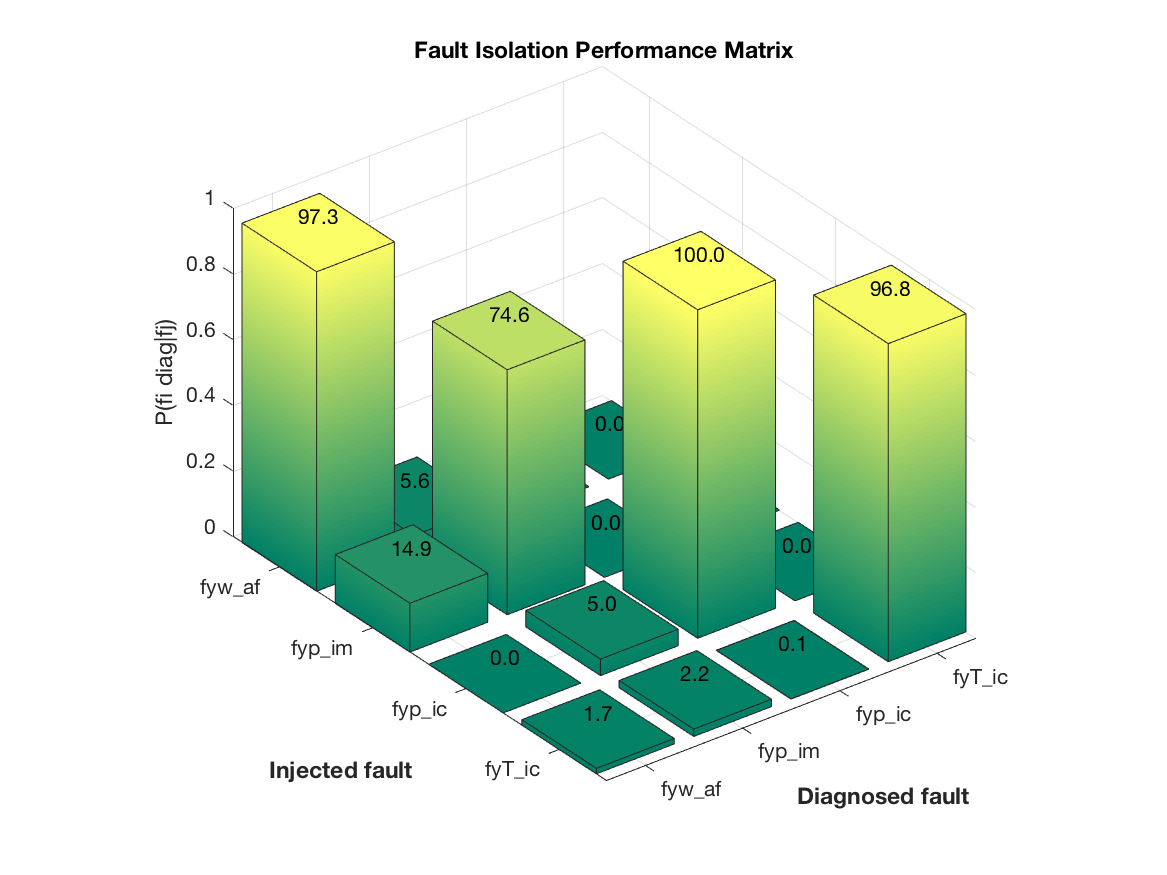 Here, the probability of correct isolation is plotted, and a perfect system would correspond to a diagonal with probability 1. It is clear from the figure that faults fyw_af, fyp_ic, and fyT_ic can be reliably isolated. Fault fyp_im however can be reliably detected but is sometimes difficult to isolate from fyw_af.